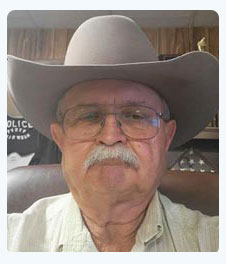 In a career spanning over 45 years, WM. Robert “Bobbie” Sullivan has been involved in various law enforcement activities, including drug investigations, undercover operations, and criminal investigations in New Mexico.

In 1987, Bobbie was assigned as a uniformed patrolman to the Artesia Police Department. Here, he rose through the ranks and was eventually promoted to Detective Sergeant. In this role, he focused on drug and internal affairs investigations.

He became commander of the Pecos Valley Drug Task Force in March 1997 — a position he held for close to 10 years.

As commander, he oversaw both tactical and administrative operations. During this time, Bobbie recognized the immense value of accessible and centralized data to law enforcement operations. So, he played a major role in designing and implementing a broad database used to track suspects, display investigative case status, disposition of cases, and drug trafficking organizations. The database provides the task force with a valuable investigative and information management tool.

Presently, Bobbie is the NM HIDTA Region VI Drug Task Force Coordinator. He is also a member of several law enforcement committees, including the NM HIDTA Sub-Intelligence Committee and the NM HIDTA Working Group, where he serves as Chairman.