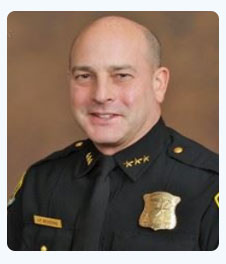 In September of 1992, he began working at the White Settlement Police Department as a patrol officer and served as a field training officer. He was promoted to sergeant in 1995, serving as the field training supervisor and three years as a criminal investigator.

In February 2003, he was promoted to lieutenant, acting as patrol lieutenant for 7 years and the support services lieutenant for 4 years. He served in every sworn officer position and supervised every division within the police department. In May 2015, he was sworn in as the chief of police for White Settlement.

Chief Bevering was instrumental in leading the White Settlement Police Department to become accredited by the Texas Police Chief Association Best Practice Recognition Program in 2013, and continued to be the program manager, with the department obtaining their second reaccreditation in 2017, and their third reaccreditation in 2021. While serving as chief of police, he updated the radio communications of the department by partnering with the City of Fort Worth Regional Radio System; equipped officers with Body Worn Cameras for more transparency; adopted an alternate promotional system based on abilities not just testing; instituted digital ticket writers among other advances within the department.

He is a graduate of Midwestern State University with a Bachelor’s Degree in Criminal Justice. He is also a graduate of the Bill Blackwood Law Enforcement Management of Texas Leadership Command College, as well as the FBI National Academy – Session 235.